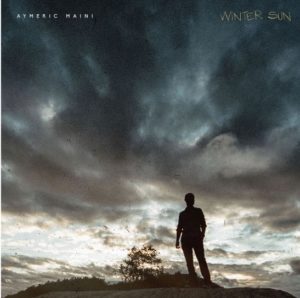 After a very noticed EP released in 2013 and more than 120 dates, Aymeric Maini took over the path of studios for the creation of his first album ‘Sun Is Back On The Way’ to be published in January 2016.

Presented in preview at Stereolux in Nantes, this first long project is part of a simple and authentic vein characterized by a decidedly organic sound. From this apparent spontaneity are outlined the features of a luminous record composed according to the meetings.

Travel book first, it was written during a year consisting of multiple journeys.

During these, music has proved to be an extraordinary vector of communication associated with the English language, in fact naturally omnipresent on the album.

But it is also the artistic complicities that have inspired ‘Sun Is Back On The Way’ singular soul:

Playing and singing with Julia Charler and David LeDeunff (Hocus Pocus) and directed by David Darricarrère (Smooth, Dtwice, Elodie Rama, Rum for Pauline, Pegasus, Elephanz), Aymeric Maini knew how to surround himself to produce sincere songs, strong of its fragilities impregnated with the elegant and timeless moisture of the soul.

Present both on the blues scene (first parts of Lucky Peterson, Maceo Parker, Ilenes Barnes or at the Cognac Blues Passion), and in pop rock venues (shows with Benabar, Cats On Trees, Luce, Mathieu Boogaerts) Aymeric Maini goes beyond genres and generations offering a unifying universe with many facets.

A second album is in preparation for 2018 and you can be sure to find Aymeric, solo, trio or quintet, on the roads to the concert halls and festivals.